Confucius say what? Whitewashed by the colorblind

Confucius Say What? Whitewashed by the Colorblind

[Image] Five women sitting at a table. The one in the middle is Asian, and the rest are white. All are smiling.

[Caption] I was at a retreat for an international women’s volunteer organization. I was the only Asian there.

[Image] A woman with short light hair, with her hands raised, palms together.

[Caption] Overall it was great, but then it happened…

[Image] The Asian woman between two white women at the table. All are smiling, but the Asian woman has one arm wrapped around her torso.

[Caption] I don’t know why I laughed along.

[Image] The three women. The woman on the left is gesturing expressively. A blank speech bubble indicates she is talking. The Asian woman is not smiling.

[Caption] And then it happened again.

[Image] The same three women. The woman on the left has her hand raised, pointing upward. A blank speech bubble indicates she is talking. The Asian woman now has both arms crossed, and looks unhappy. The two white women are still smiling.

[Image] The Asian woman sitting alone at a boardroom table. She looks very sad, and her shoulders are slumped.

[Caption] I can’t remember if there was a fourth. What I remember is how it made me feel. I instantly felt awkward and that I didn’t exist. My colleagues were oblivious about what these jokes might mean to someone like me.

[Image] A white man with a goatee, facing the reader and looking confused.

[Caption] When I told my husband (who is white):

Man: Are you looking for something to be upset about?

[Caption] When I told my best friend:

[Caption] Well yes, I am a person. But part of what makes me a person is my Chinese heritage. The color of my skin, the shape of my eyes, and the history of my people – it’s all part of my personhood.

[Image] The panel mimics a computer screen. In the top right corner is an icon of a paintbrush that says “Tool – Brush” On the screen is a stick person with long black hair, smiling. The mouse arrow hovers right next to the stick figure.

[Caption] It’s hard when people claim to treat you as a person, but their concept of “person” is so centred on the Caucasian experience.

[Image] The stick person looks concerned and is looking down at a new icon reading “Color”. A mini-menu has popped up underneath the icon with the option “Default.” The mouse arrow is hovering over “Default” The Tool icon in the top right corner is now of a Paint Bucket.

[Image] The stick figure is now a fully-rendered person: the Asian woman. But her skin remains uncolored. The icon in the top right corner is still a paint bucket.

[Caption] …just means defaulting to the societal standard, which is white. ]]Panel

[Image] The Asian woman, now with her normal skin colour, reaching upward to the top left of the screen, and hitting “Undo (CTRL + Z)” with her forefinger. She looks annoyed.

[Caption] But I’m NOT white. My race is a significant part of my personhood. It affects how I experience things, including jokes about Asians.

[Image] A faded aggregation of panels 4,5,7, and 8 – the laughing white women, the husband and the best friend. All four pictures are background to the caption.

[Caption] When they don’t “see color”, it becomes okay to make jokes about Asians in front of me, and then accuse me of getting upset over “nothing.”

[Image] The Asian woman, sitting at the boardroom table, alone. She is looking directly at the reader and looks sad.

[Caption] One of my African American friends scolded me for not speaking up. He said I should have made them stop and reminded them I am Chinese. Would I have made a difference? Would they have reacted the same way as my best friend and my husband? Would they have dismissed me as overreacting? I don’t know. But, for my part, I think I’ll try to say something next time, though I’m not sure what. There’s only one thing I know for sure. There will be a next time.

I was at a retreat for a women’s volunteer organization – this organization works primarily with girls, but it was an event where adult leaders were invited from the entire region. Adult volunteers were there from several counties.

I was the only Asian woman there.

There are many non-caucasians in the organization, but there weren’t any at this retreat. They all looked white to me – but I’m not fool enough to claim to know for sure of anyone being white through and through. To my quick assessment of the room, I was still the only person who was Asian.

I had a wonderful time at the retreat. I didn’t feel out of place and certainly felt welcomed by everybody there. Truly, truly, these were incredible women and they were all great volunteers. We taught each other new things, discussed organizational changes, and planed regional events. It was nice to be part of this group of women.

But then there was this one moment. I have been processing “the moment” for a while now, and I’m not sure how I should have handled it.

It started when someone told a “Confucius say,” joke.

For the uninitiated, it’s usually some clever turn of phrase in broken, English. For example: “Confucius say man who cut self while shaving lose face.”
I laughed the first time. And then the next one was said – in that broken English and fake Chinese accent. And the next one. I can’t remember if there was a fourth.

What I remember is how it made me feel.

Offended isn’t the right word. It feels too strong. I wasn’t “offended”. But I instantly felt that I did not belong, that I was not part of them. That I wasn’t white…and they were oblivious about what those jokes might mean to me.

Well yes, I am a person. But I am a person who happens to be Chinese, who felt awkward and non-existent when they told those jokes. It’s not like I can change the color of my skin or the shape of my eyes or the history of my people. That too is part of my personhood, but the jokers seemed to not notice. And when you don’t acknowledge that part of me, it becomes okay to make jokes about Asians in front of me, and then accuse me of getting upset over “nothing”.

My friend who is African American scolded me for not stopping them in the moment. He said I should have made them stop making those jokes and reminded them that I was Chinese. That I should have said the jokes were offensive. He scolded me for having laughed at the first joke. That it made me complicit and that I’ve somehow done a disservice to all the people in the organization and society as a whole.

But it took me days to even put a word to my experience. It took me days to understand it in any way and to put it into context for myself. I know I wasn’t ready right then to say a single word about it. It’s hard when people claim to treat you as a person, but their concept of “person” is so centered on the Caucasian experience. “Not seeing color” means defaulting to the societal standard, which is white. They are saying that they treat everyone as white people – instead of as people who have racial differences, who live different lives because of those differences. This is why saying Asian jokes is okay in their mind. They’re not treating me as a person. They’re treating me as a white person.

If I had spoken up and shamed these women, my newly made friends, told them that their jokes were racist, what exactly would have happened? Would it have made a difference, would they try to understand why it was problematic? Or would they all react the same way as my best friend and husband, and think that I’m over-reacting, being too sensitive?

I wish I had a nice neat bow to finish up this little essay but I don’t. I don’t think I can figure all this out in one little essay. For my part, I think I’ll try to say something next time. I’m not sure what I will say. There is only one thing I know for sure.

There will be a next time. 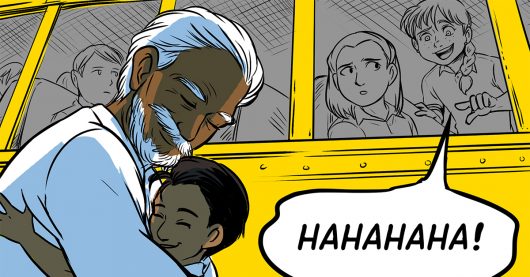 YOUR People Are Taking Over This Town

Growing Up In a Multi-Racial Household

Ladies Who Love Comics
Turn your story into a comic

10 responses to “Confucius say what? Whitewashed by the colorblind”