[Image] A woman with shoulder-length hair and glasses, walking away from two men who are yelling at her with their hands cupped around their mouths.

[Caption] Instead I get random strangers telling me I’m fat.

[Image] A man at a bar, holding a bottle, and facing the reader. He has a disgusted expression on his face.

[Caption] At the bar…

Man: Ew, the only way a fattie like you will get laid is if you’re raped.

[Image] The woman walking down the street. A convertible car carrying three men is passing her. The men are yelling at her.

[Caption] Or mid-day, on the street

[Image] The woman, viewed from behind, walking. A silhoutette of a man is behind her, facing her.

[Caption] I once had a man follow me for about 2 blocks spewing hate.

Panel 6
[Image] The same scene viewed from the front. The woman is crossing her arms. The man, now visible, is wearing a suit and waving his arms.

Man: Whatcha doing in public, you’re unfit to be seen!

[Image] Closeup of the woman’s face. She looks scared and sad. The man’s face behind her is angry, and he is pointing directly at her.

Man: You’re a fucking burden to society! Our insurance is higher ‘cause of fatsos like you! You need to hurry up and die!

[Image] The woman leaning on the edge of a bathtub, holding her face in her hands.

[Caption] It’s somehow ok to say these things to a fat woman. She can be dressed up, active, feel good about herself, having a great time. But you can destroy all of that so easily that she’ll spend the night crying.

[Image] A closeup of the woman holding her face at the edge of the tube. Tears are streaming down her face between her fingers.

[Caption] Have another beer buddy.

[Image] A cartoon outline of a person, filled with the word “fat” repeated over and over again.

[Caption] It’s why I avoid going out, or make sure I’m accompanied if I do. Most of the time I’m fine with myself. But when I go out alone, the world seems SO DETERMINED to tell me I should have problems with myself. And if it looks like I’m happy about myself, people get right up in my face to make sure I know I’m not acceptable. Some days, fat is all I am…even in my own head. It’s all anyone sees about me, right? …Fat.

People on the street feel free to tell me I’m fat. It’s the strangest thing. Do they think I haven’t noticed my own body? Or that I’ve never noticed guys following me and telling me I’m a cow? Never noticed guys oinking at me from a car?

I once had a man follow me, at night, for about two blocks. He spent the entire time telling me that my weight meant I should die, that I was unfit to be seen. He told me I was a burden to people, “costing everyone insurance money” (never mind the fact that I didn’t have insurance).

Two weeks ago I was on the street, and a black guy in a car with his friends shouted at me that I was a cow, and everyone in the car laughed. One of them “offered” to fuck me if I paid them before the traffic lights turned. Then they drove off. This wasn’t even late at night after drinking. It was 3 in the afternoon on Tuesday on the biggest street in Boston.

Or at a bar: “The only way a fattie like you will get laid is if you’re raped.”

I avoid going out. If I do go out, I make sure that I’m accompanied, because people are less likely to abuse me.

It’s somehow ok to say these things to a fat woman. She can be dressed up, active, feel good about herself, having a great time. But then you can destroy all of that so easily that she’ll spend the night crying in the bathroom. Have another beer, buddy.

Some days it’s all I am, even in my own head. It’s all anyone sees about me, right? 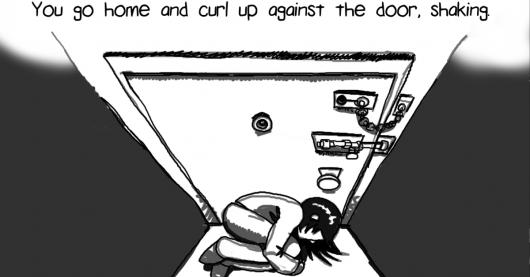 My Hollywood Nightmare
Turn your story into a comic