I am Stronger Despite What He Did To Me

CAPTION – I am stronger despite what he did to me.

CAPTION – But I’ve learned that abuse doesn’t end with the abuser.

CAPTION – That the nightmare doesn’t end with the relationship.

PANEL 2,3,4 – A close up of the AUTHOR, who is in her early twenties. She looks worried.

CAPTION – At first I was always afraid. Afraid I would run into him, afraid that I’d go back to who I was…

CAPTION – I had nightmares to the point of being nearly unable to sleep.

CAPTION – I started having panic attacks from just hearing his name.

CAPTION – I tried not to leave the house out of fear.

PANEL 5 – A big panel. Author’s ex is looming over her, as a literal giant. His hand is keeping her down as she tries to get up.

CAPTION – It took me months to realize that what he had done to me wasn’t what normal partners did.

Ex – “I’m sorry, but it’s ultimately your fault. You make me so jealous that you made me drink.”

PANEL 6 – A close up of the Author. She is crying.

CAPTION – I often ended up sobbing and begging forgiveness for his actions.

CAPTION – My mind was warped.

CAPTION – He left me a deteriorated puddle of the strong woman I was when we started dating.

PANEL 7 – Author is crying into her hands. She is sitting on a couch, and there’s a tissue box and used tissues beside her.

CAPTION – I was eventually diagnosed with PTSD.

PANEL 8 – Author is talking to two friends. She is crying as she tries to explain the abusive relationship.

CAPTION – After months of being afraid to say anything, I finally told my friends.

PANEL 9 – Close up of Author from the same scene as above.

CAPTION – I needed someone to believe in me.

PANEL 10 – From the point of view of the Author, talking to her friends. Her two friends look skeptical. One friend is avoiding eye contact.

Friend 1 – I believe you, but I want to get his side of the story. Maybe he had a reason for doing those things?

Friend 2 – He’s a good friend to me… and even if he did those things to you, I still think he’s a good person.

PANEL 11 – The two friends are talking to each other. Author is now silent, fidgeting with a napkin, looking down.

PANEL 12 – Same scene as above, but a close up of the Author.

CAPTION – One by one, I lost a lot of friends.

CAPTION – Getting through all of this has been the hardest thing in my life.

CAPTION – But what I really want people to know is that it can be done.

CAPTION – While I still have PTSD right now, I am stronger. I stand up to the people I love.

PANEL 12 – Author is surrounded by new friends who are all walking together, laughing.

CAPTION – I have new friends who are understanding.

CAPTION – I am more empathetic towards other people who have been traumatized because I have been there.

CAPTION – And most of all, I love myself enough to get out of relationships or friendships that I know are unhealthy, even if I am scared to be alone.

In my freshman year of highschool, I met a guy who I thought was amazing. He was incredibly charismatic, and he seemed to be very sensitive and caring. I had never met someone like him before; I was in love. By the end of freshman year, we were dating, and I was so happy to have gotten that chance with him.

However, in the first few months of dating something changed. One day, I told him that I was going to hang out with one of our mutual friends, who happened to be a guy. He told me he was jealous, that he didn’t want me to be alone with him because he was afraid he would try something. I told him he had nothing to worry about, and went to our friends house anyway. A few days later at school, an acquaintance told me that he had sent dirty pictures to her and her friend and begged for some in return. When I confronted him about this, he said that he was sorry but it was ultimately my fault. He told me that I had made him so jealous, that he started drinking, and that he hadn’t really cheated on me because he had been intoxicated.

I believed him. I had never been in a real relationship before; this was my first love! Of course he would be telling me the truth. So, upon his request, I stopped hanging out with our friend unless he was with us.

Any time we disagreed on something, he would give me the silent treatment. He made me think that he would leave me if I didn’t apologize, and this attitude would often result in me sobbing and begging his forgiveness. He made it very clear in our fights that I was the problem, and I believed every word. He loved me, so why would he lie?

After about 4 months of dating like this, he began to pressure me into doing sexual things with him. I had only ever kissed someone, and felt incredibly nervous when it came to going further than that. He started by telling me that kissing him without letting him ejaculate gave him “blue balls” and complained about the pain endlessly. I felt so guilty for causing him pain, but I told him that I wasn’t ready.

He started to do things to me anyway.

I told him no, asked him to stop, and tried to laugh it off when he didn’t. He was just a boy, and as people often had told me, they couldn’t help it. It was probably my fault anyway. That’s what he always said.

This pattern of emotional manipulation, isolation, and sexual assault ended when he broke up with me eight months later, but my warped mindset didn’t. He left me a deteriorated puddle of the strong woman I was when we started dating. It took me over two months to realize that what he had done to me wasn’t what normal partners did. It was abuse, and it wasn’t my fault that he did it. I became immensely afraid of ever seeing him again, for fear that my mind would go back to how it was when we were together. I started to have panic attacks when I would hear his name, or even think about seeing him in public. I had nightmares to the point of being nearly unable to sleep, and began to be somewhat of a shut-in because I was worried that if I went out into town, I would see him.

I told my friends about what he did to me after months of being afraid to do so, because they all liked him. I told them with tears in my eyes that I had been diagnosed with PTSD by my therapist because of what he did to me, that I was so afraid of seeing him because he might do those things again, and that I needed someone to believe me because I had to talk about it with someone who knew what he was like. One by one, they told me they didn’t believe me, or that I was exaggerating to get attention, or even that they did believe me, but he was still a good person and was probably just confused when he did those things to me.

Since then, I have lost every friend I had at that time because of him. I have made new friends who try to understand what happened to me, and I have been working with my therapist on getting past what he did to me for almost three years.

Getting through all of this has been the hardest thing in my life. But what I really want people to know is that it can be done. While I still have PTSD right now, I am stronger despite what he did to me. I notice red flags in relationships much sooner than I once did. I stand up to the people I love when they ask something unreasonable of me. I am more empathetic towards other people who have been traumatized because I have been there. And most of all, I love myself enough to get out of relationships or friendships that I know are unhealthy, even if I am scared to be alone.

Not All Women Are Maternal 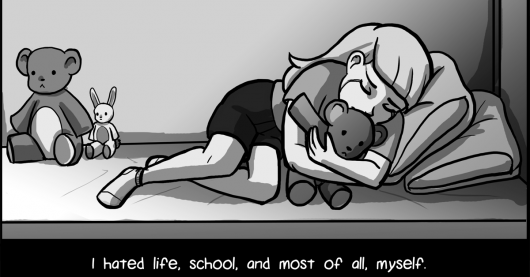